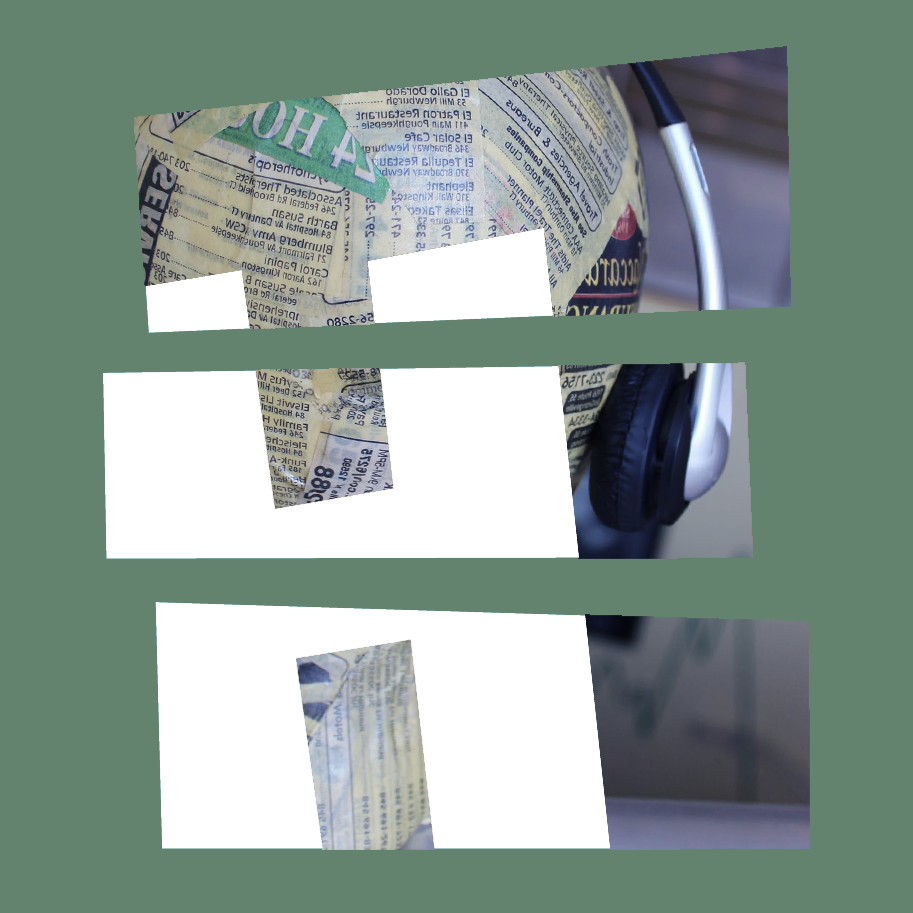 Laura Kunreuther: Hello and welcome to Experimental Humanities Out Loud, the podcast where we investigate how technology mediates what it means to be human. In this episode, we feature work from Vanessa Shapiro, a student who is part of my course, The Voice in the Machine. Drawing inspiration from philosopher Gilbert Ryle’s notion of “the ghost in the machine” to critique mind-body distinctions, the course asks students to think critically about the relationship of human self and voice to technologies and practices that animate and circulate voices. We explored, for example, the way the presumed immediacy of the voice often depends upon specific media or technologies that make voices audible. Vanessa’s final project for the course speaks directly to these issues.

Vanessa Shapiro: Did you hear that?

Vanessa Shapiro: What about that?

Vanessa Shapiro: Could you make out what that said? Okay. Let me help you. They say, clearly—

Vanessa Shapiro: And please help me—

Vanessa Shapiro: You can hear it, right? This is audio from Buzzfeed Unsolved, a TV-length webseries that’s also streamed on Hulu. In this clip, the two hosts, Shane and Ryan, are in the historic Los Angeles Viper Room, sitting on an unfinished dirt floor, where a body is rumored to have been buried. The sound you hear is a spirit box, a machine that randomly cycles through radio channels every half-second or so. According to those who use it, the device can be used to hear the voices of the dead. Buzzfeed Unsolved is far from the first show that’s used this device. If you’ve watched any ghost show, and there are a lot of them, you’d know that the spirit box is a ghost hunter’s bread and butter. This holds true off-screen as well. The ghost hunter’s arsenal is vast. Spirit boxes, motion detectors, infrared cameras, connect cameras, thermal cameras, electromagnetic frequency detectors, and high quality voice recorders, are all used to make contact from beyond the grave. But that’s kinda’ weird, right? For most of history, you saw the dead with ritual, with magic, with mediumship, and sure, these methods still exist, but paranormal investigators are not motivated by religion. As noted by anthropologist Misty Bastian, most ghost hunters consider the practice a hobby. An interest developed not from religious beliefs, but some sort of earlier paranormal experience that they wish to understand. There is no concrete goal to ghost hunting, aside from communication. While an exorcism may be performed on a spirit deemed demonic, ghost hunters, as Bastian says, mostly seek to “console and commemorate.” While the occasional New Age shaman or psychic may assist in hunts, there’s a focus on proof, on record, on an observable reality.

John: Okay, um, we can fill her in when she comes back. All right. Welcome everybody, my name is John, and I’m going to be your tour guide for this evening, I want to thank you all for choosing ghost tours of Newport for your event tonight. Always a little hesitant to call it entertainment, but I’ll get into that in a bit–

[John’s talking continues in the background]

Vanessa Shapiro: A few weeks ago, I went on a ghost tour in Newport, Rhode Island. Before we got to the haunted areas, our guide, John, gave us a primer on ghost hunting terminology. There are two kinds of ghosts, according to him: orbs, and full body apparitions. His explanation is kind of long, but the gist is that orbs are balls of thermal energy, while full body apparitions are the more archetypical shadowy figure. He brought a thermal sensor with him to check for hot spots. Then he tells us how to take pictures:

[the volume is turned up on John’s audio]

John: Key to this. Now why am I asking you to turn off your flash? ‘Cause the next place we’re going is loaded with orbs. So, if you– so what happens is if your flash goes off, and suppose a bug or a piece of dust is going in front of your–

John: —your, your lens. We’re going to get a false positive. However if your flash is off, and you’re taking a picture and you see a darkness—

John: —and there’s a little ball of light there, well, now it’s not so easy to explain away. Now the other thing, if you have an Apple phone, I suggest you use liveshot. The cool thing about liveshot is that you’ll actually see the orb moving around; they fly around, they’re not in one spot. They actually really fly.

John: Now, the technique for taking pictures—the other thing with orb—, and it may appear as a streak of light or look like a worm almost.

Vanessa Shapiro: I appreciate John’s honesty here. He makes it obvious that this is a somewhat rare event and that there are false positives. He shoots down a lot of people’s pictures through the night, including one of mine. We’ll get to that later. Every stop on the tour had a story attached to it, and upon researching further, most have some amount of historical evidence to their benefit: the ghost ship Palatine, the United States’ first and only trial that accepted the testimony of ghosts, wandering soldiers in the former army barracks, all dark marks on the history of Newport. As John Nagle says in his 2018 paper for “City & Society,” “ghosts and haunted ruins ensure that public space can never be programmed in comprehensive ways that simply affirm the power of the state and its neo-liberal partners. Ghosts and hauntings are notifications of what’s been suppressed or concealed, being very much alive and present—messing, or interfering precisely with those incomplete forms of containment. Effectively, ghosts are a star on a space. Something so horrible happened at a certain point in time, it exists in that location forever. And no demolition, refurbishment, or PR campaign can get rid of it.” In some ways, recording technology has a similar method of haunting. Once something is on the internet, it’s forever. When something is recorded, its temporality is stretched out, untethered from space. You can listen to it, or see it anywhere. For as long as recording technology existed, it has been connected to death. In the same way that ghost hunters search for evidence of their experience, people saw the use of recording as a way of solid proof of something having once lived in a specific moment in time. One of the first record companies, His Master’s Voice, was named after a painting of the dog Nipper, listening intently to a phonograph playing a recording of his deceased owner’s voice. With the piece acting as a primary form of advertising for the company. This was a primary focus to the general public: the idea that one’s base instinct would be so convinced by the recording that they’d believe their late loved one to be captured inside of it. Even the staunchly atheist Friedrich Nietzshe has said, “the voice formerly invisible and irretrievably lost as soon as uttered can now be caught in its passage, and preserved, practically forever.” Nietzsche here seems to come to the crux of recording technology’s power. While writings or paintings may allude to one’s existence, recordings allude to temporality, an interiority existing not at present, but at the time of recording. At a certain point in the ghost hunt, around the time an unexpectedly cynical scepticism was beginning to come over me, I saw something. Within my phone camera was a small blue speck, following me around like a comet. Is this an orb? Is this what we’ve been waiting all night for? I rushed to our guide to show him what I was experiencing, and was met with disappointment. “No,” he said. “It can’t be a spirit. See, the speck stays in the same place on screen, no matter where you move it. And you can see it in the live viewport. It doesn’t work that way. It’s not a ghost.” Except, sometime later, the speck reappeared. Another person captured the blue speck, and this time, it didn’t show up on the viewport. This, John agreed, could very well be a ghost. I noticed at that moment that the lucky photographer had an older model phone than I had, with a supposedly less sophisticated camera. I didn’t notice a difference with the new model, but it could be there. Maybe my phone can see flares on the viewport, and others can only see it in photos taken. I couldn’t know for sure though. I don’t know how this works. It occured to me then that I knew about as much about my phone as I did the ghosts around us. I know the basics, sure, shutters, HDR, livecam, but if you asked me to explain how these features came to be, how they’re programmed, what hardware they need, I’m lost. It may as well be magic. Where is the internet? We know how we get there; computers and Wi-Fi signals in the air, but nobody knows how they work, really, at least not most people. The internet is everywhere, and that makes it nowhere. It is a portal to another plane of existence, one where identity and information becomes fluid. The realm is populated by avatars, illusions to interiority, to people. Anonymous, unknowable, yet intelligent. They are not human, entirely, but they are records of humans: ghosts in the machine. Ghosts are spacial, unbound from time. While recording is temporal, unbound from space. They exist solely on one side of our perception, and thus cannot be fully reached. At least not yet. Perhaps this is why technology is used to capture the spiritual. In a way, they both live in the same proxy world, in layers outside of reality that we do not and cannot understand.

Danielle Riou: EH Out Loud is produced at Bard’s Center for Experimental Humanities by Krista Caballero, Corinna Cape, and Bird Cohen. With season two produced in collaboration with me, Laura Kunreuther and the EH sound cluster. Sound editing and music by me, Laura Kunreuther, Ariel West, and Bird Cohen. Transcription by Anna Hallett Gutierrez and Ariel West. You can find out more about Experimental Humanities at Bard by visiting eh.bard.edu that’s eh.B-A-R-D.edu.